Rabbi Zalman Schachter-Shalomi z”l (1924 – 2014) — “Reb Zalman” as he preferred to be known — was the most influential Jewish change-maker of his generation. His ideas and work spawned the worldwide Jewish Renewal movement, the Havurah movement, numerous Jewish retreat centers and innovative social-change programs, and the interfaith eldering wisdom movement.

Countless innovations in Jewish life and worship throughout the Jewish denominations sprang from his creative mind and from the thought-leaders he attracted. He was visionary in creating fully inclusive community, making Jewish mysticism and joyful observance available to several generations of American Jews, as well as engaging in deep ecumenical relationships with leaders of the world’s religions.

Schachter-Shalomi’s insatiable curiosity, keen intelligence, unusual creativity, and personal courage were hallmarks of his life from a young age. Growing up in Vienna, he partook of numerous Jewish movements flourishing at the time — secular, Zionist, intellectual — well beyond his family’s Belzer Hassidic roots. Fleeing the Nazi onslaught, the family eventually made their way to New York in 1941. There, he studied to become an Orthodox rabbi and was ordained by the Lubavitch Hassidic (Chabad) yeshiva in 1947. The sixth Lubavitcher Rebbe, Yosef Yitzchak Schneersohn, made him an emissary to college campuses; however, he left his position after discovering a wider spiritual world and experimenting with the sacramental uses of hallucinogens. 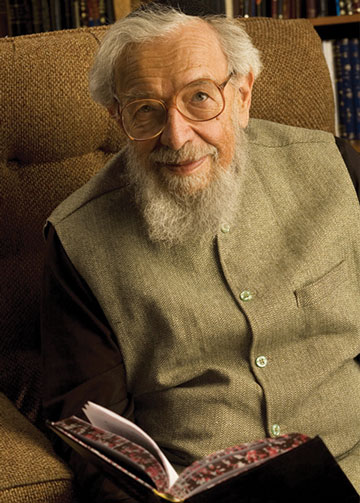 Crossing traditional boundaries, Reb Zalman earned an MA in the psychology of religion from Boston University and a doctorate from the Reform movement’s Hebrew Union College. His major academic work, Spiritual Intimacy: A Study of Counseling in Hasidism (1991), was based on his doctoral research into the system of spiritual direction practiced in Chabad. As a spiritual counselor himself, he was known for being so fully present to the other that they felt “as if no one else existed to him in that moment.” After turning 60, he also pioneered the practice of “spiritual eldering,” working with fellow seniors on coming to spiritual terms with aging and becoming mentors for younger adults, as described in his book From Age-ing to Sage-ing® (written with Ronald Miller, 1995).

Drawn to the spiritual and social change movements of the 1960s, and influenced by Christian, Sufi and Eastern mysticism, he reached out to the “Baby Boom” generation of Jews hungry for spirituality. Reb Zalman is widely considered the “Zaide” (grandfather) of the Havurah movement throughout North America. In 1968, he supported Rabbi Arthur Green in the founding of Havurat Shalom in Somerville, MA, an experimental rabbinical yeshiva that grew into a collective egalitarian spiritual community. The First Jewish Catalog, written by Havurat Shalom members Richard Siegel, Michael Strassfeld and Sharon Strassfeld (1973), helped popularize Reb Zalman’s eclectic, do-it-yourself, meaning-making approach to Jewish practice.

In 1978, he founded B’nai Or (“Sons of Light” in Hebrew), a name he took from the Dead Sea Scrolls, as both a local Philadelphia Jewish Renewal congregation and a national organization. The widely worn rainbow prayer shawl he designed according to kabbalistic principles is still known as the “B’nai Or Tallit.” Both the congregation and the organization later changed their names to the more gender-neutral P’nai Or (“Faces of Light”). In 1993, the national P’nai Or organization merged with Arthur Waskow’s Shalom Center, to form ALEPH: Alliance for Jewish Renewal, integrating the two principles of Tikkun haLev (“repair of the heart”) and Tikkun Olam (“repairing the world”).

Since that time, ALEPH has served as the primary container for Reb Zalman’s work and as an incubator for innovative spiritual and social change projects. Jewish Renewal services are typified by the dialectic between ecstatic community participation and private mediation and contemplation. Reb Zalman encouraged the use of arts in liturgy—music, movement, drumming, and chant. He introduced practices from the Human Potential Movement into the service, and used American folk tunes to re-enliven ancient hymns (for example, singing the well-worn “Adon Olam” to the tune of “Amazing Grace”). Conversely, Reb Zalman innovated English translations of liturgy and Torah text that can be chanted to the traditional melodies. Similarly, he encouraged the growth of new interpretations of biblical text through the practice of contemporary midrash (“intepretation”) through the literary, performing, and visual arts. ALEPH has been called the “R&D Department of the Jewish world,” and many of Reb Zalman’s innovations have been widely integrated into the progressive Jewish denominations.

In 1990, Schachter-Shalomi was among the diverse group of Jewish leaders who traveled together to Dharamsala, India, at the request of the Dalai Lama, to discuss with him how a people can survive in diaspora. That meeting of East and West was chronicled in Rodger Kamenetz’s The Jew in the Lotus, and inspired the flowering of Jewish approaches to meditation.

Schachter-Shalomi held academic posts at the University of Manitoba (Winnipeg) and Temple University (Philadelphia), and in his later years held the World Wisdom Chair at Naropa University (Boulder). He also served on the faculty of the Reconstructionist Rabbinical College, Omega, and many other major institutions.

Reb Zalman’s influence has widened through the work of his lay and rabbinical students. In 1974, he ordained his first rabbi, Daniel Siegel of British Columbia. After numerous private ordinations, he founded ALEPH: Alliance for Jewish Renewal’s Ordination Program, which has ordained over 80 rabbis, cantors and rabbinic pastors and provides post-graduate training as a Mashpia Ruchani (Spiritual Director). Renewal-oriented rabbis, cantors and rabbinic pastors from all seminaries now enjoy the benefits of Ohalah, a trans-denominational professional organization incubated at ALEPH.

Schachter-Shalomi produced a large body of written, audio and video works, typified by a breadth of knowledge, free-association homiletic style, use of psychological terminology, and imaginative metaphors from nature, science and emerging technologies. Some of his most important books include: Paradigm Shift (1993), From Age-ing to Sage-ing® (1995), Jewish with Feeling: A Guide to Meaningful Jewish Practice (2005), A Heart Afire: Stories and Teachings of the Early Hasidic Masters (2009), and Gate to the Heart: A Manual of Contemplative Jewish Practice (2013). As befits an early adopter of emerging technologies, many of Reb Zalman’s teachings are available on youtube.com.

In 2012 his book, Davening: A Guide to Meaningful Jewish Prayer, won the National Jewish Book Award in Contemporary Jewish Life and Practice. The last book printed before his death is the recently released Psalms in a Translation for Praying (2014), which reflects his egalitarian, post-triumphalist, ecumenical, and Gaian approach to spirituality.

In 2005, the Yesod Foundation created The Reb Zalman Legacy Project “to preserve, develop and disseminate” his teachings, which led to the 2011 donation of the Zalman M. Schachter-Shalomi Collection to the University of Colorado at Boulder, and the 2013 creation, with the Program in Jewish Studies, of the Post-Holocaust American Judaism Archives.

Reb Zalman died on July 3, 2014. He was survived by his wife of twenty years, Rabbinic Pastor Eve Ilsen, ten children, and numerous grandchildren and great-grandchildren.

www.jewishrenewalhasidus.org: A BLOG with precious teachings of Reb Zalman z’l. Between 2007 and 2013, many of the entries were submitted by Reb Zalman himself. The site continues to grow through submissions by gabbai Seth Fishman who has served as the BLOG Editor since its inception.